Jack Uldrich, the Founder of the School of Unlearning, is a highly acclaimed global futurist, speaker, and best-selling author. 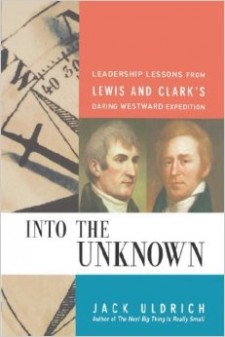 GREAT FALLS, Mont., June 19, 2018 (Newswire.com) - The story of Meriwether Lewis and William Clark is one of futurist Jack Uldrich's favorite historical accounts, and one that he believes is still highly relevant for today’s business leaders. Their story and its lessons for today's leaders was so compelling to him that in 2004 he decided to write a book about it: Into the Unknown: Leadership Lessons from Lewis & Clark’s Daring Westward Expedition.

The resulting award-winning book was well-received by business leaders, including this review by The Executive Insider: "Imagine a Ken Burns documentary with insightful analysis from Jack Welch and you have a sense of the informative and engaging approach Uldrich utilizes."

Although Lewis and Clark were old-school military men, they were very forward-thinking. They arranged a diverse team, including a native American woman, and they were flexible when it came to discipline. They emphasized encouragement and reward over punitive measures.

Jack Uldrich, Futurist & Founder of the School of Unlearning

Based on the book and his extensive knowledge of this historic journey, Uldrich then partnered with Jeff Applequist of BlueKnight Leadership to create a three-day experiential leadership seminar in Great Falls, Montana, based on the leadership lessons of Lewis and Clark. This year marks their eighth year conducting the seminar, which sells out quickly.

Uldrich and Applequist are both Minneapolis-based businessmen and they share the experience of being former military officers and a mutual interest in applying lessons learned in historical events to modern leadership challenges. Uldrich is a futurist, consultant and founder of The School of Unlearning. Appelquist is a lawyer and a former Target and Best Buy manager. Both men are also award-winning authors.

They believe that every organization, whether they like it or not, will head into the unknown at some point. Their three-day experiential seminar is designed to help the business leaders anticipate change and develop leadership skills by emulating Lewis and Clark's daring journey into the Northwest Territories in the early 1800s.

Although Lewis and Clark were old-school military men, they were very forward-thinking. They arranged a diverse team, including a native American woman, and they were flexible when it came to discipline. They emphasized encouragement and reward over punitive measures.

What makes their expedition relevant today?

"Lewis and Clark took rational risks, hedged their bets and sometimes went backward to take stock. When they reached the headwaters of the Missouri, they fully expected to see a river that would lead them to the West Coast," says Uldrich. "All they saw were hundreds of miles of mountains. There will always be challenges, and for those, the leadership lessons provided by Lewis and Clark are timeless."

He also knows embracing paradox when forging ahead is a powerful technique - meaning that wise leaders do in fact, look back, before they move ahead. That's what this course in Great Falls is all about, he says, "Walking in the footsteps of our ancestors to steady our future course."

"From now on," Uldrich says, "tomorrow is going to be radically different than either yesterday or today. We need more leaders with the courage of Lewis and Clark. Leaders who are willing to unlearn their old ways and chart brave new courses into the unknown."

This experiential leadership program has been conducted with clients in the agriculture, banking, utility, insurance and medical devices industries and is tailored for any organization wishing to participate.

Get notified about new releases.